In Disrepair, Bush House in Index is Being Renovated 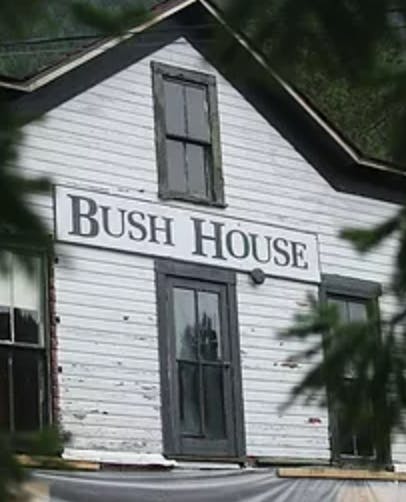 In Disrepair, The Bush House in Index is Being Renovated

INDEX — The historic Bush House has lost its grandeur and prestige over the past century. The 9,000-square-foot building has its windows covered and there’s a big hole in the first floor. Walls are missing. And it needs a big drainfield.

The good news: it’s no longer sinking or rotting, which were the reasons the hotel closed in 2001. “It doesn’t look good, but it has not been this structurally strong as it is right now,” said Blair Corson, the new owner of the Bush House. Corson, 32, is renovating the three-floor hotel at 308 Fifth St. in hopes of turning it back into a community gathering spot.

Corson took out a $400,000 loan to buy it Jan. 1 and pay for renovations. He, his family and some friends have managed to lift the building to install a new foundation, and they put on a new roof and reframed damaged walls. Corson hopes to finish all work by April and have the building ready for guests by summer.

Corson’s family runs Outdoors Adventures Center, which is located at the former Index tavern, which the family bought in 2006. The Bush House will not be part of the family business. Corson wants to attract community investment so residents can share the profits. “It’s vital that the town stays in control of it,” Corson said.

Corson plans to have 10 guest rooms on the second floor and a hostel in the third. There is work being done in a cottage nearby. In total, he expects room for 40 guests. He doesn’t think he will have a hard time finding customers. His outdoor recreation business has customers who receive training that can last several days. For lodging, he usually recommends hotels in the area, but the closest is 30 minutes away. The area is visited by outdoor activities enthusiasts all year long. “There is certainly a demand that is not being met,” Corson said.

Corson also wants to offer a restaurant and a stage for live music. He is looking for business partners for that end of things. His biggest challenge is to expand the drainage system. It doesn’t threaten the project, but is delaying progress, he said.

The Bush House was built in 1898 to serve the many people traveling over Stevens Pass by train. It became a community center from the start, said Louise Lindgren, Index-Pickett Historical Museum director. Tourism has always been one of Index’s main industries. At one time the town had five hotels, but the rest were either destroyed by fire or torn down. There are no written records, but pictures taken at the beginning of the century suggest the hotel was well attended with dances, weddings and parties, Lindgren said. “It was the place to go to have a really good time, and it served excellent food,” Lindgren said.

The food made the hotel famous in the late 1970s and the 1980s. People from Seattle came on the weekends and lined up for lunch, said Sandy Gordon, who worked at the hotel as a cook, waitress and groundskeeper in 1980s and 1990s. Gordon, 70, saw the hotel’s decline in the 1990s. The new owners wanted to make the place more sophisticated and make it look more like Bellevue, she said. That meant changing the menu, which the locals and regulars didn’t like. “There was no gravy and no fried food on the menu,” Gordon said. People didn’t like the working conditions either. Maintenance was neglected and the building started sinking. Doors and windows didn’t close, and there were termites, Gordon said. “It became so bad, customers could see the termites hatch and fly out,” she said.

She retired in 2000. The Bush House closed the next year, leaving Index with nowhere to gather and celebrate, she said. That’s why she is happy with Corson’s project.

“I think its going to bring new life to the town,” Gordon said. “A lot of people are looking forward to this.”

Find out more about the project at www.bushhouseinn.com or at the building’s Facebook page.

Link to the original article online at www.heraldnet.com