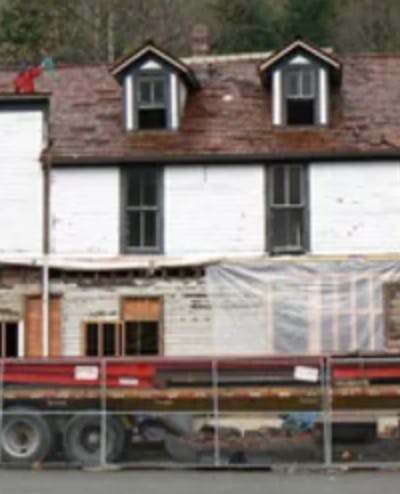 By Chris Hendrickson, special to the Monroe Monitor

The last of five hotels that once flourished in Index, the historic Bush House Inn is being brought back to life after a decade of neglect.

As you cross the Skykomish coming into town, Bush House draws you in.  Sitting majestically at 308 Fifth St., the 9,000 square-foot building is a curious mix of old and new, as the three-story inn is now in the midst of an extensive renovation process.

Bush House was established in 1898 by Clarence and Ellie Bush. Although the inn has changed ownership numerous times, it has retained the original name. Through the 1990s, Bush House had a gourmet restaurant and was often used for community gatherings and events. Lack of maintenance and upkeep caused structural instability, though, and in 2001 Snohomish County revoked the inn’s occupancy permit due to safety concerns.

The decade that followed saw Bush House fall into hopeless disrepair. In spite of sporadic renovation on the part of temporary owner Loyal Nordstrom, heiress of the Nordstrom department store fortune, the inn’s conditions underwent a rapid and steady decline, left to fend for itself against the inclement mountain weather, heavy snowfall, earthquakes, vandals and transients.

In 2009 Bush House was identified as an endangered property through the Washington Trust for Historic Preservation.

In 2010 negotiations started between Index resident Blair Corson and the Inn’s owner as he began to have visions of renovating Bush House and restoring the inn to its former prestige.  Finally, at the end of a lengthy process, Bush House was sold to Corson in December of 2011. Corson took out a $400,000 loan to make the purchase, and the sale was final on January 1, 2012. Improvements to the property began almost immediately.

The Corson family also own and operate the Index business Outdoor Adventures Center, located in what was formerly the Index tavern. They purchased the tavern in 2006 and completely renovated it, renaming it River House Coffee shop. River House serves as both an espresso parlor and community meeting place.

Index residents and business owners have offered equipment, services, time and expertise to help with the Bush House renovation process, which began in May of last year. The inn had to be raised and leveled, and the understructure of the house had to be completely rebuilt.

“Basically, the entire bottom of the house was underground and rotting,” stated Corson. “It’s perfectly straight now. There’s not a quarter inch of difference in the whole building.”

The new roof was completed in November, just in time for the first dusting of snow. A new chimney was built, and all the windows on the first floor have been replaced.  New siding is currently going up and is two-thirds of the way complete. Corson hopes to have the rest of the siding up by the end of January.

There have been some difficulties throughout the process in regards to the expansion of the inn’s drain-field, but Corson is optimistic. He points out that the town of Index, the county building department, and the Snohomish County Health Department have all been extremely helpful in allowing the Bush House renovations to move forward in a limited capacity while final determinations regarding the status of the drain-field are pending.

It is not believed that Bush House could have survived another heavy winter snowfall.

Once the rest of the siding is in place, the interior improvements can begin.

Bush House will feature 10 nostalgically themed guest rooms, a third-floor hostel, full restaurant and bar, banquet room, a stage for live music performances, an ADA-accessible suite, a family rental unit, and a library specifically dedicated to the history of Index, supported by the Index Historical Society. Corson hopes for the Inn to be fully operational by April of this year.

Corson is looking for a partner to operate the restaurant and is currently conducting interviews. He is also working with legendary guitarist Roger Fisher, who is most well-known for being one of the founding members of the band Heart, to help create and develop a live music venue at the Inn.

Fisher, currently a Monroe resident, is looking forward to helping grow the music scene in the historic mining town.

“Upon meeting Blair Corson and his family recently, an excitement began building regarding the potential artistic community that could eventually be the town’s backbone. Thoughts and intention of having a home there have taken residency in my head and heart,” said Fisher.

Outdoor recreation is currently the mainstay of the Index economy, and is steadily continuing to grow, with Index being referred to by some as the “Yellowstone of Washington.” Travelers come to Index for rock-climbing, whitewater rafting, hiking, and fishing. Bush House will provide lodging, food, and entertainment all with an underlying reverence for the history of Index.

Support for Bush House can be accomplished in a number of ways.  On Saturday, Jan. 26, the Corson family will be hosting a mystery dinner fundraiser at the River House Coffee Shop. The evening includes dinner and an interactive murder mystery for guests to solve. 1920’s themed attire is encouraged and advance reservations for this event are required. For registration information, please go to www.bushhouseinn.com.

The mystery theme is particularly apropos for the Bush House. It is reputed to be haunted by the ghost of a woman named named Annabel who hung herself in the stairwell rising to the third floor. According to local legend, she had heard that her fiance had died in the mines, so she was distraught and committed suicide, all for naught; her fiance wasn’t dead after all.

The story of the suicide is almost certainly apocryphal, but a ghost hunting team brought a medium who said that it did take place, although the woman’s name wasn’t Annabel. That won’t stop Annabel from being honored in the newly revamped building; a second-floor bathroom is going to be called Belle’s Bath after the ghost.

Tax deductable donations can be made through the Index Historical Society’s historic preservation fund.  Send email to [email protected] with any questions about donating.

People who prefer to be a little more hands-on can volunteer their time and join one of the community work parties. Check the Bush House website or Facebook page for information on upcoming events.

Link to the original article online at www.monroemonitor.com